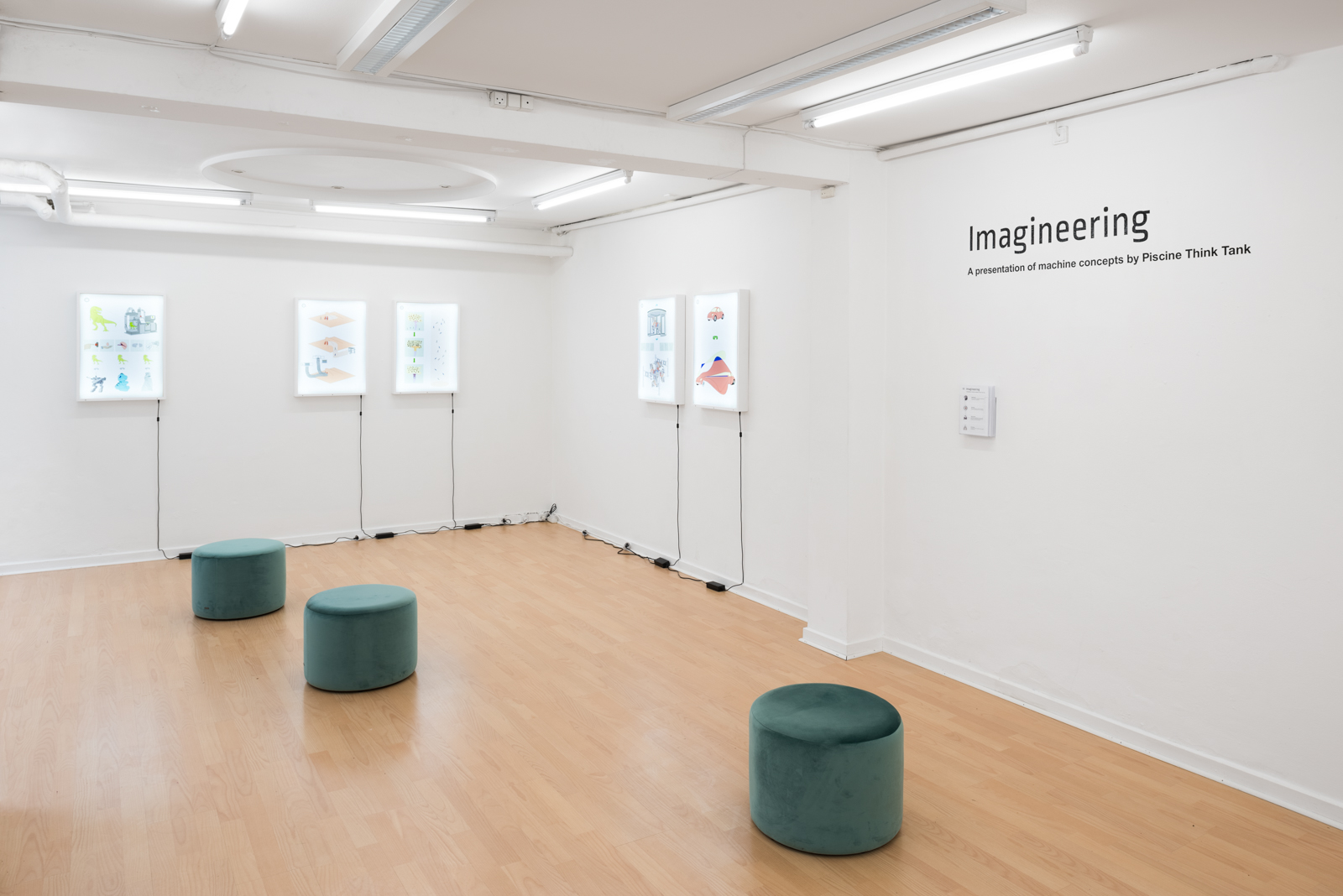 “The field of imaginary sciences has grown remarkably in recent years. New subfields are constantly emerging within the interstices of social production which Piscine Think Tank term The Terrain. We wish to recognise the need for the development of products oriented towards the subject of The Terrain, whom Piscine Think Tank addresses as The User. Piscine Think Tank strives towards the goal of solving problems between The User and The Terrain through the application of new technological developments. It is required that The User imagines the machines as body schema utilizing their mechanics to redefine body schema. If applied correctly, the machines enable The User to transform spatialities, and thus correct spatial discrepancies between The Terrain and The User itself. ”

Imagineering was a collaborative project presented by Piscine at Adult exhibition space in Copenhagen. The Piscine group presented itself as a think tank which developed imaginary machines aimed towards the contemporary user. The exhibition itself presented 5 machine concepts, which were described through 8 light boxes on the walls, as well as in an accompanying publication containing text. Each machine corresponds to a body part, making the conceptual machinery represent both the actual and the abstract body. 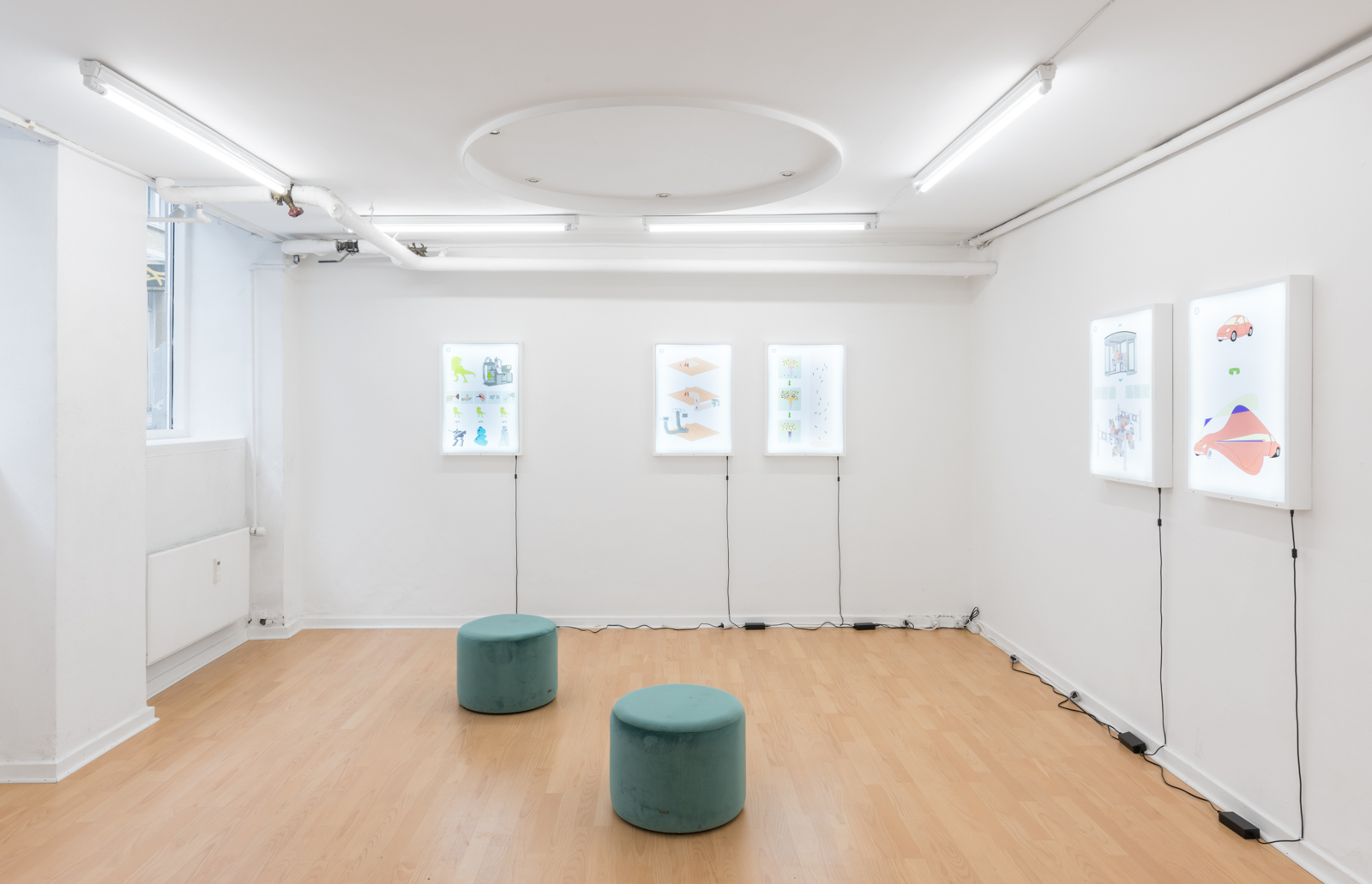 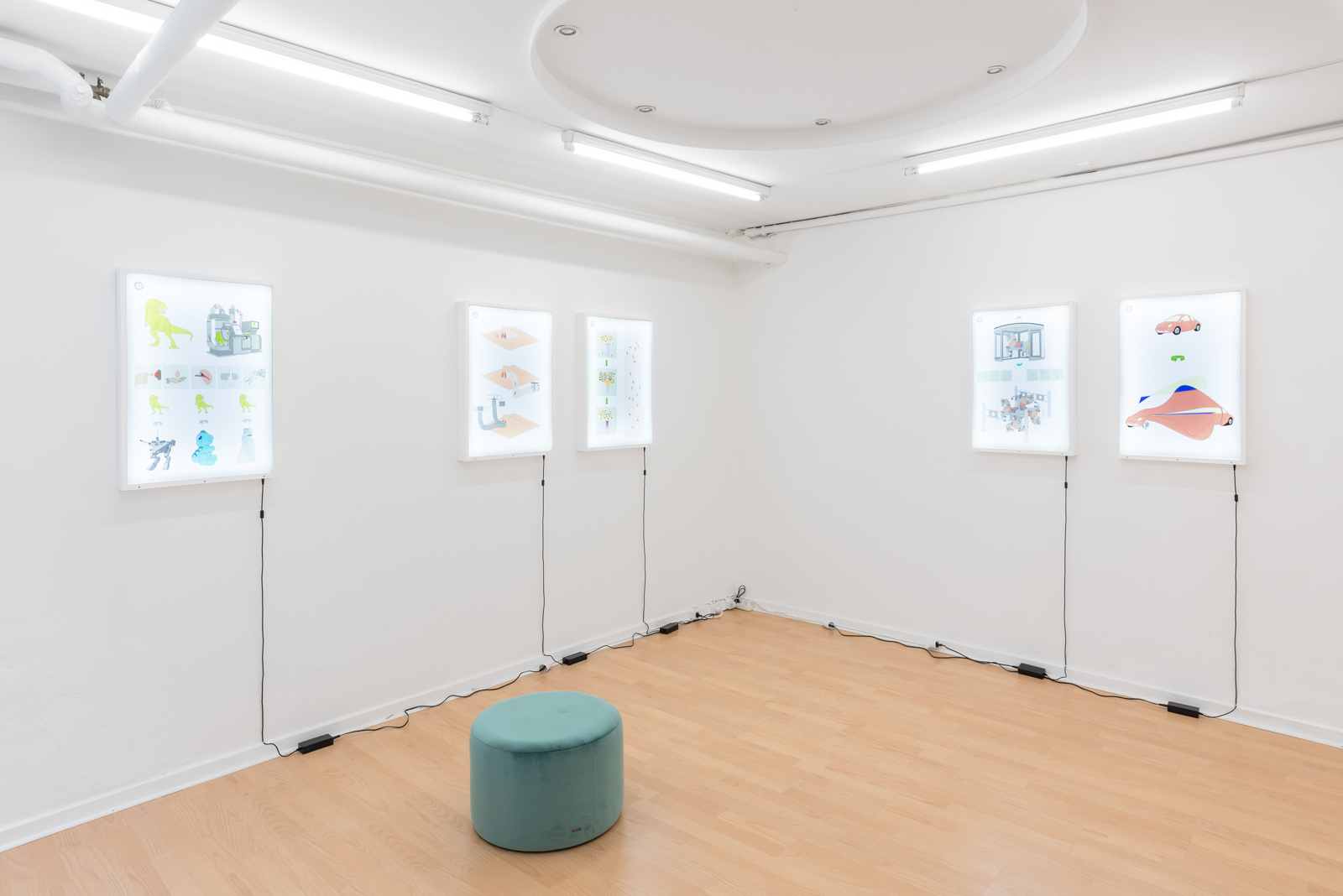 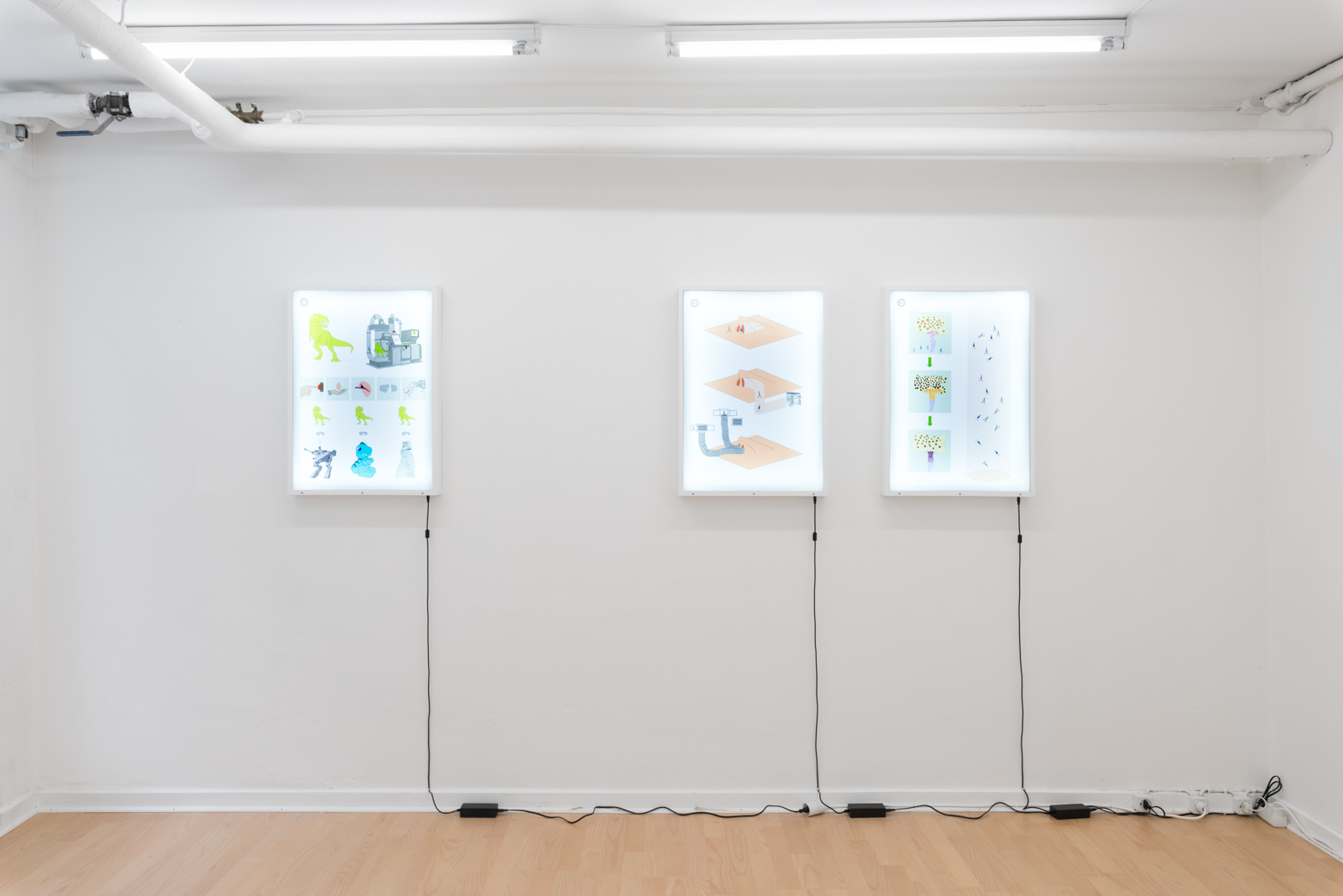 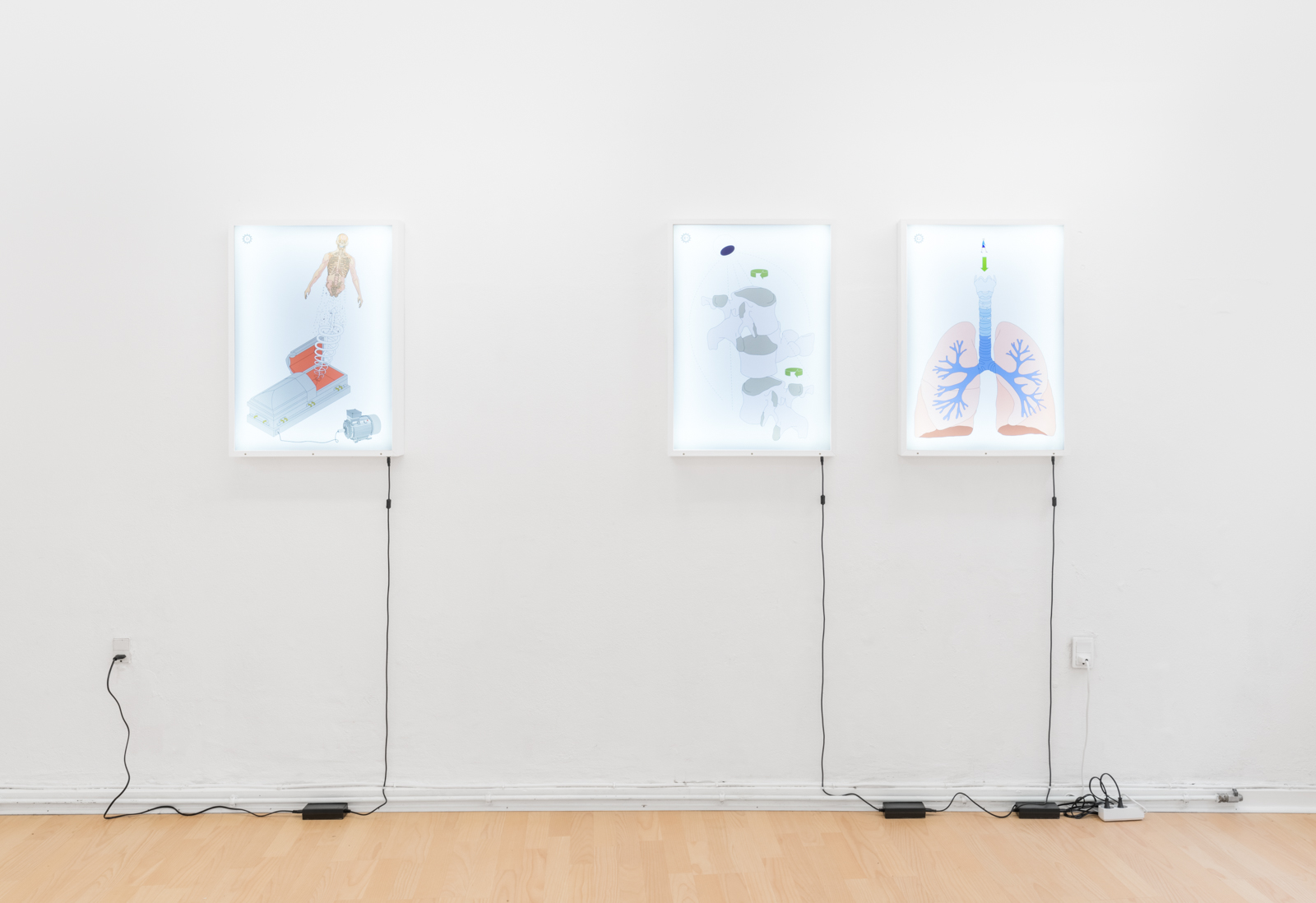 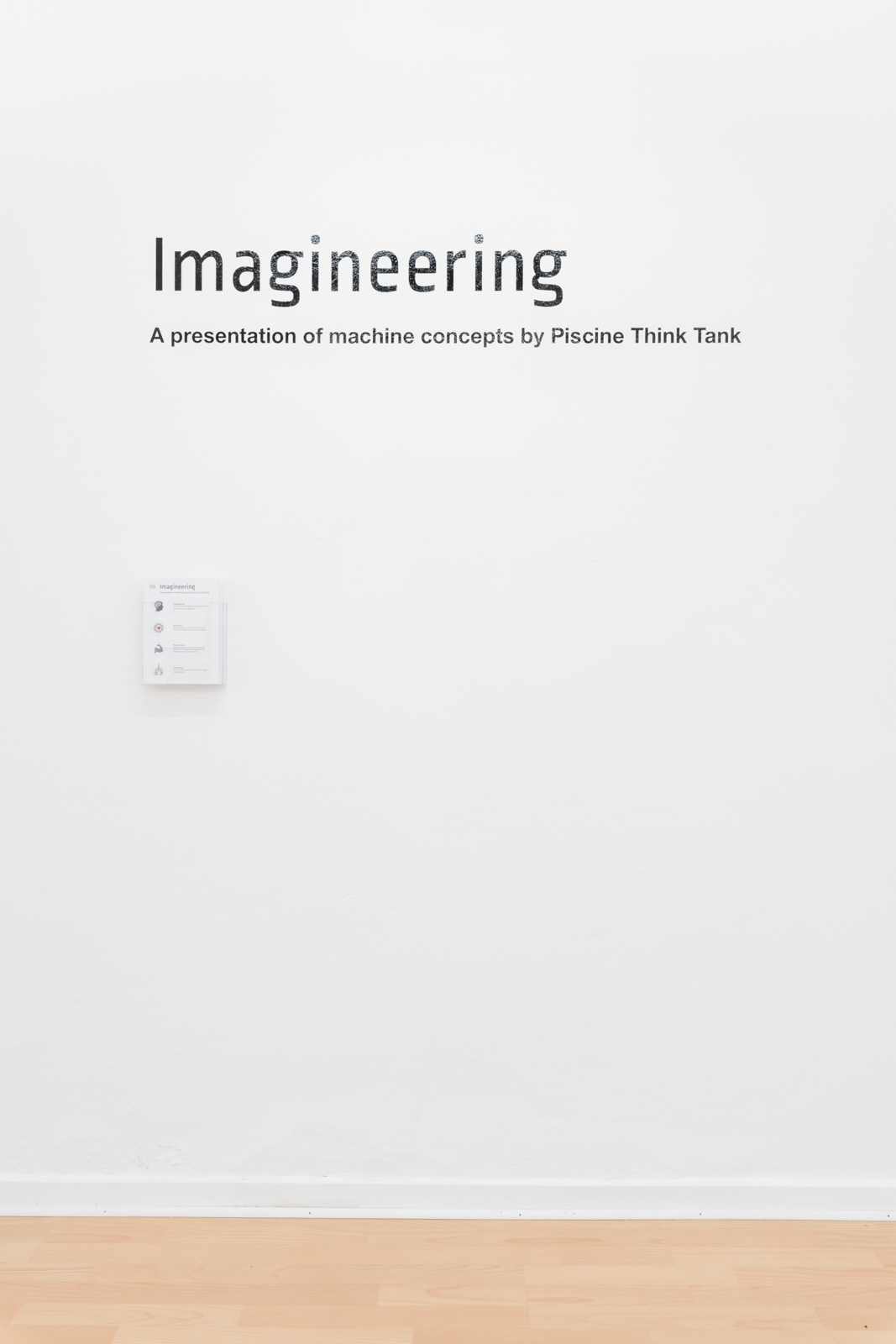 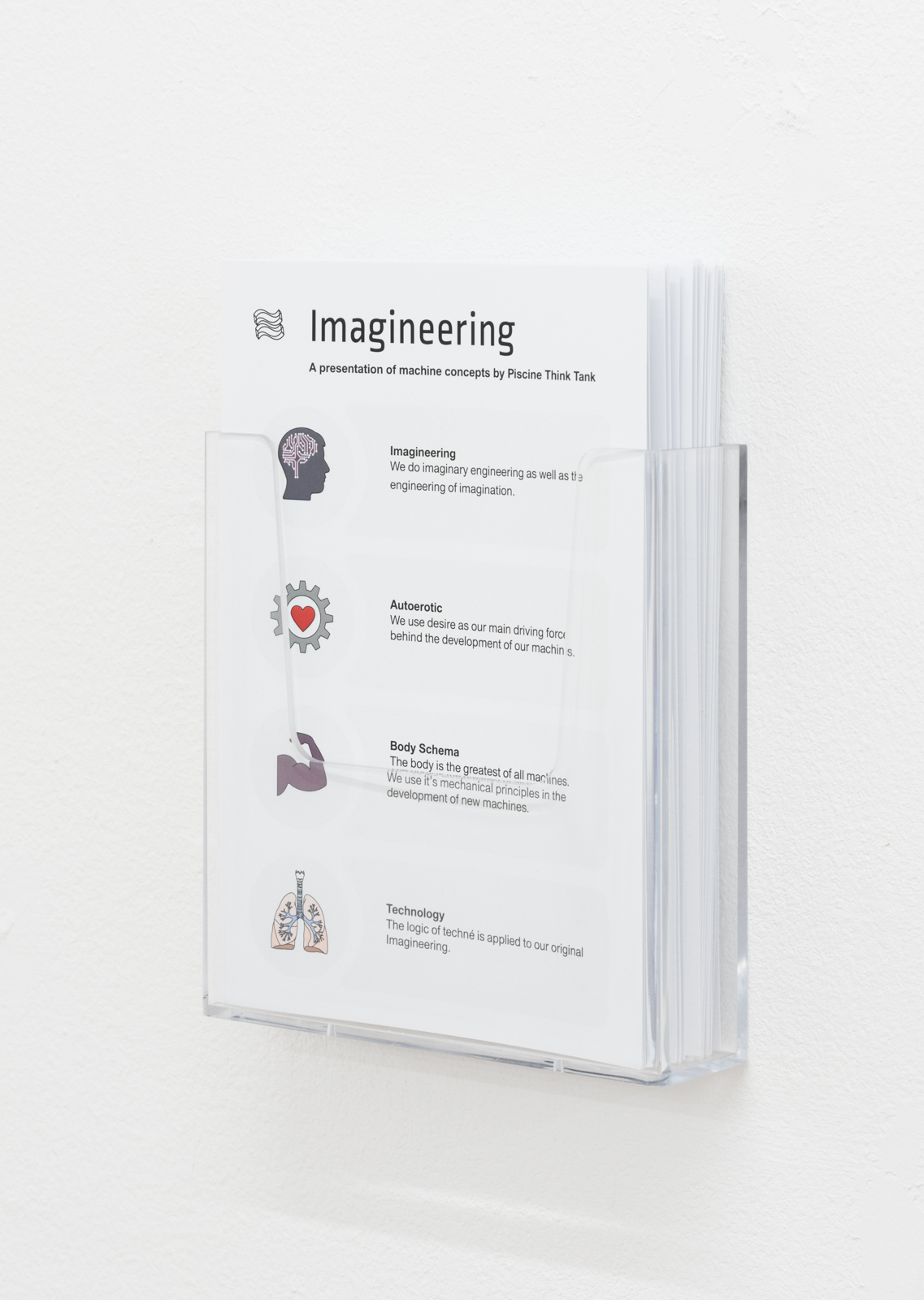 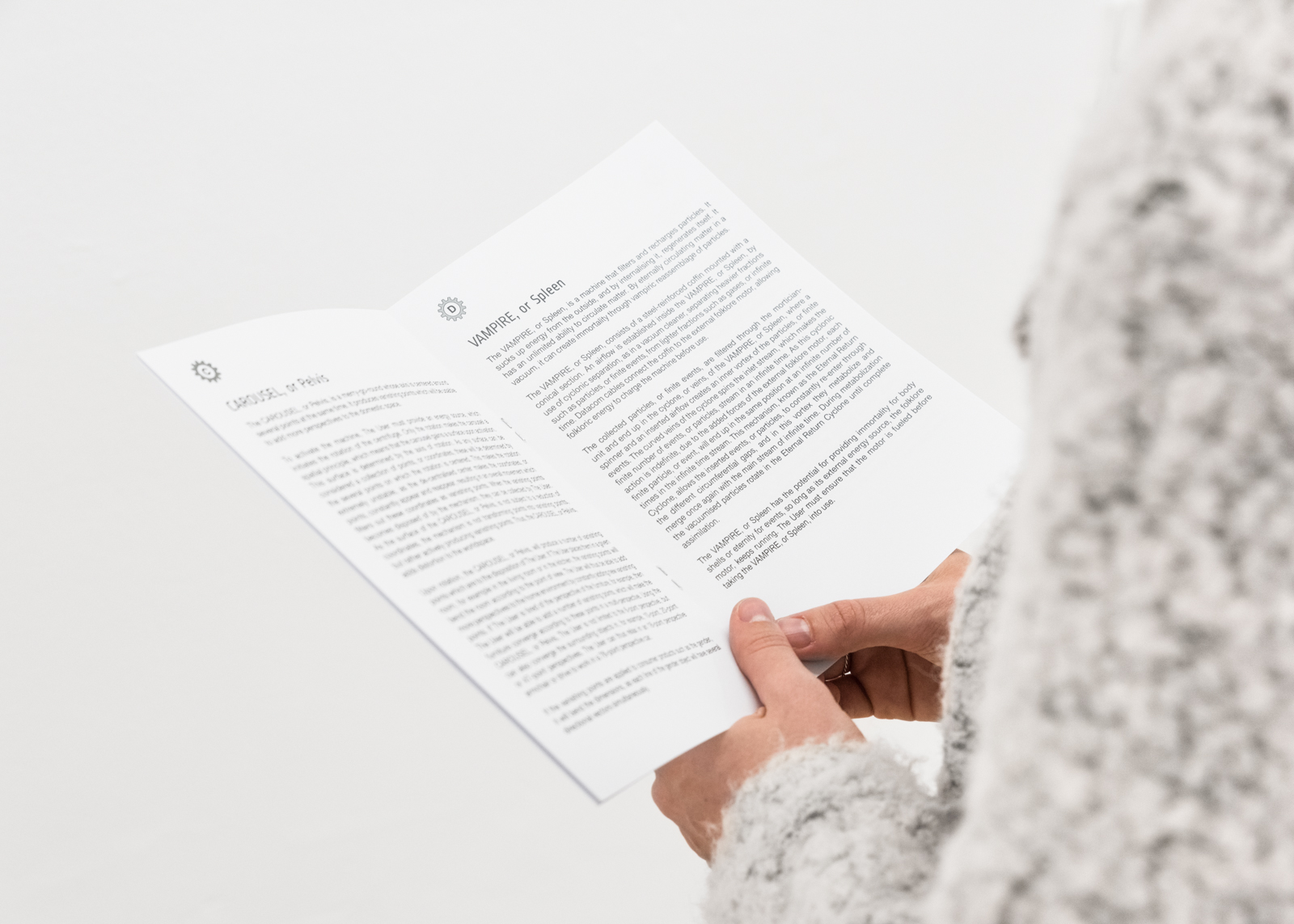 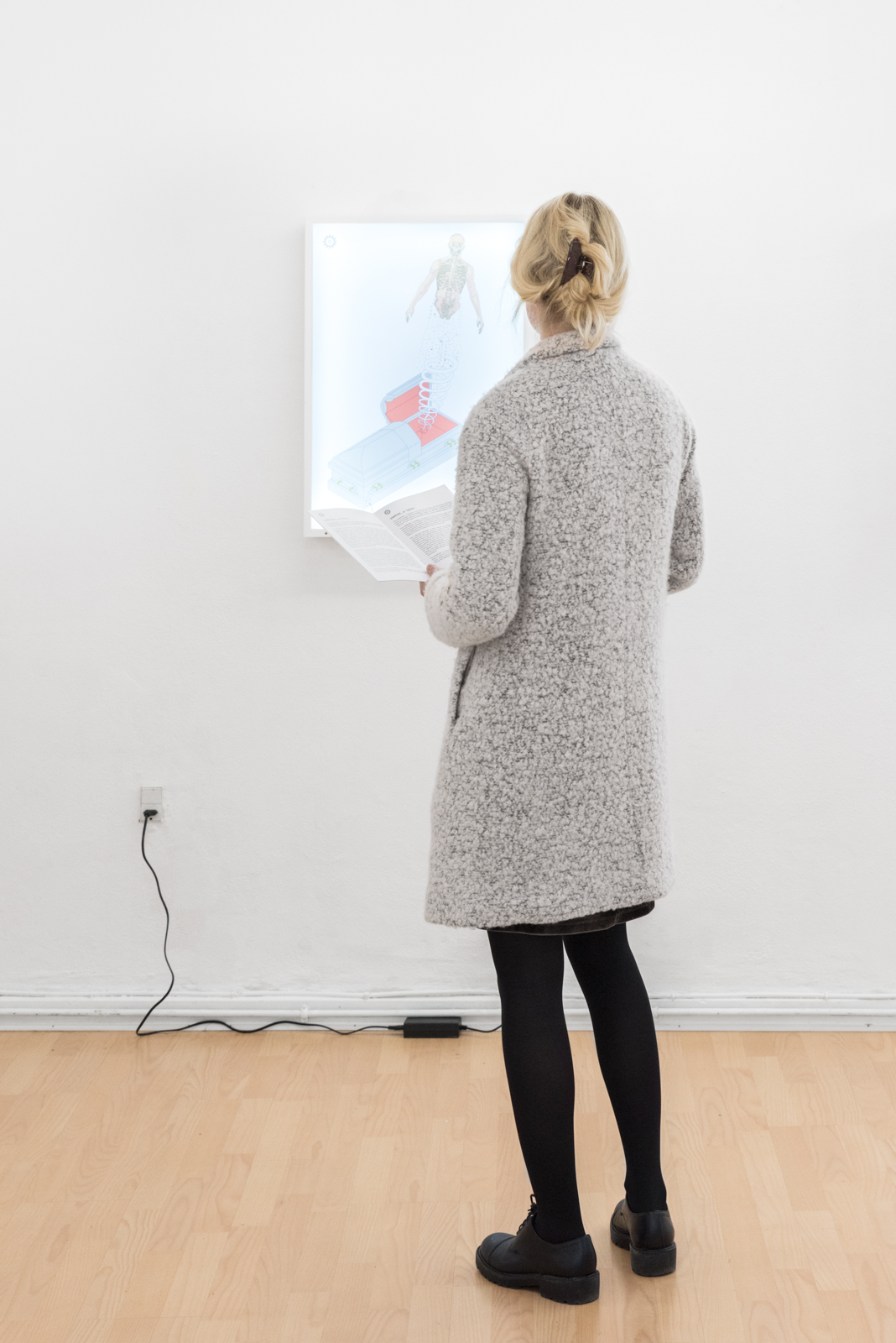 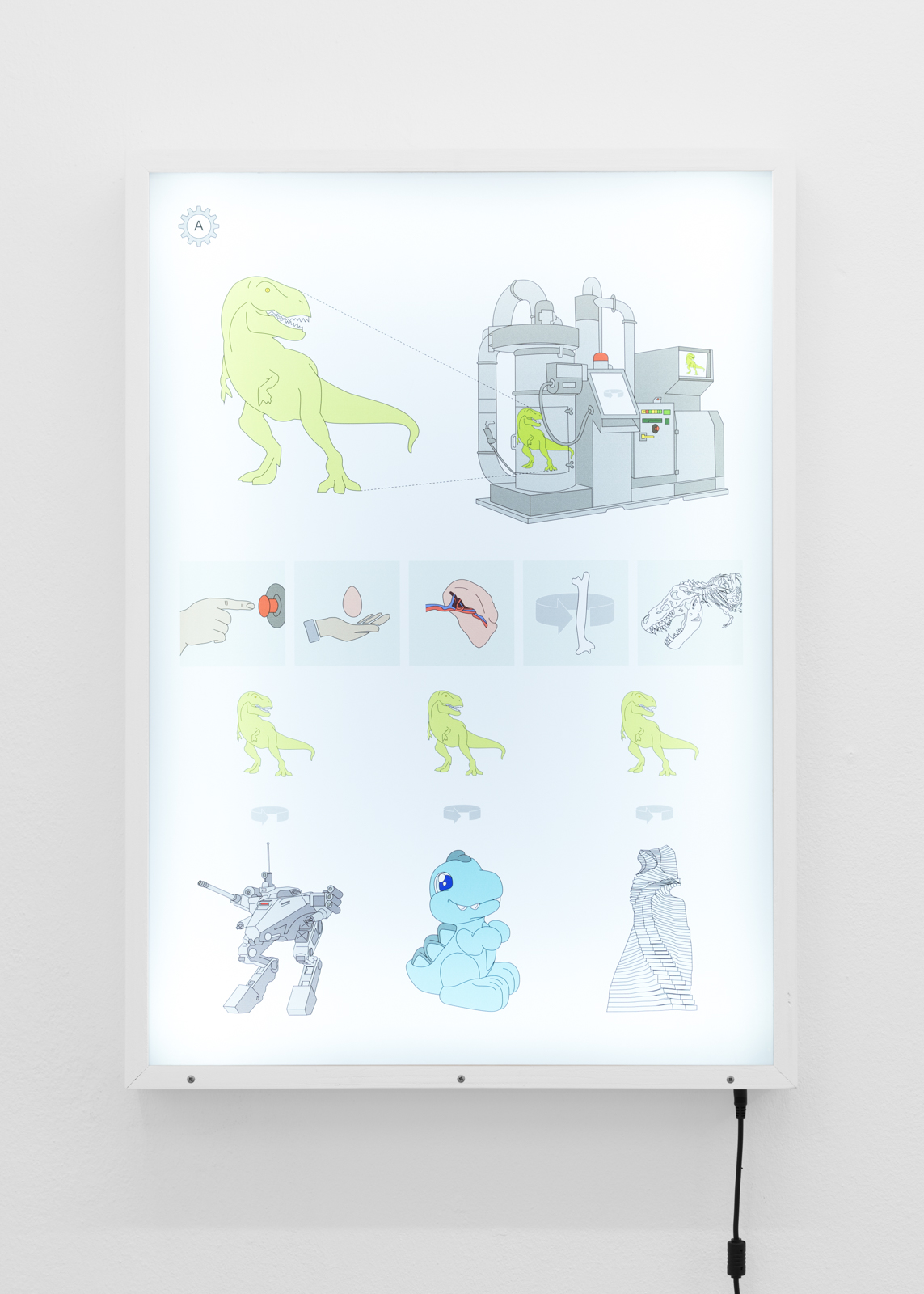 The T-REACTOR, or Stomach, needs the T-Rex as its source of energy in order to initiate its operation. When The User inserts the T-Rex energy source, and activates the machine, it establishes a transfer function between the object sectors of The Terrain. The Terrain can be seen as a mass divided into different rings, just as in a tree trunk. These different rings are called modules, or landscapes. The rings are all subdivided into smaller pieces, like a pie chart, and these pieces are called sectors. Incorporated in this area, both horizontally and vertically, are the object sectors. These sectors imply that all objects belong to their class of objects, for example, that the T-Rex belongs to the class of dinosaurs. As soon as the T-Rex is inserted as an energy source in the T-REACTOR, or Stomach, the movement between the object sectors will transform so that the objects can change class. As a result of this, the leg, for example, may differ from the class of legs and now belong to the class of sofas, and the table can leave the class of tables and now belong to the class of weather conditions. Of itself, this process will allow the T-Rex module to spin between any type of dinosaur, which, in essence, means that the energy source gains free movement between any object sector. The transformation of the T-Rex into any dinosaur whatsoever, will furthermore accelerate to such a level that the T-Rex is transformed into any dinosaur simultaneously, and can no longer be measured. Because of this, the T-Rex can also be termed as Any-Dinosaur. As the products produced by the machine are morphologically identical to the T-Rex, these products can also be denoted as Any-Dinosaur, or Any-Product.

The T-REACTOR, or Stomach, is composed of an opaque black box system, where only the input (T-Rex, or Any-Dinosaur, energy source) and output (Any-Dinosaur, or Any-Product) can be determined. This is because the internal structure is working at such an accelerated speed, that it cannot be measured by any device available today. Unlike other black box systems, the input and output of the T-Reactor, or Stomach, cannot be thought of as unidentical, but rather as morphological variants which are derivative to the energy source (T-Rex, or Any-Dinosaur). 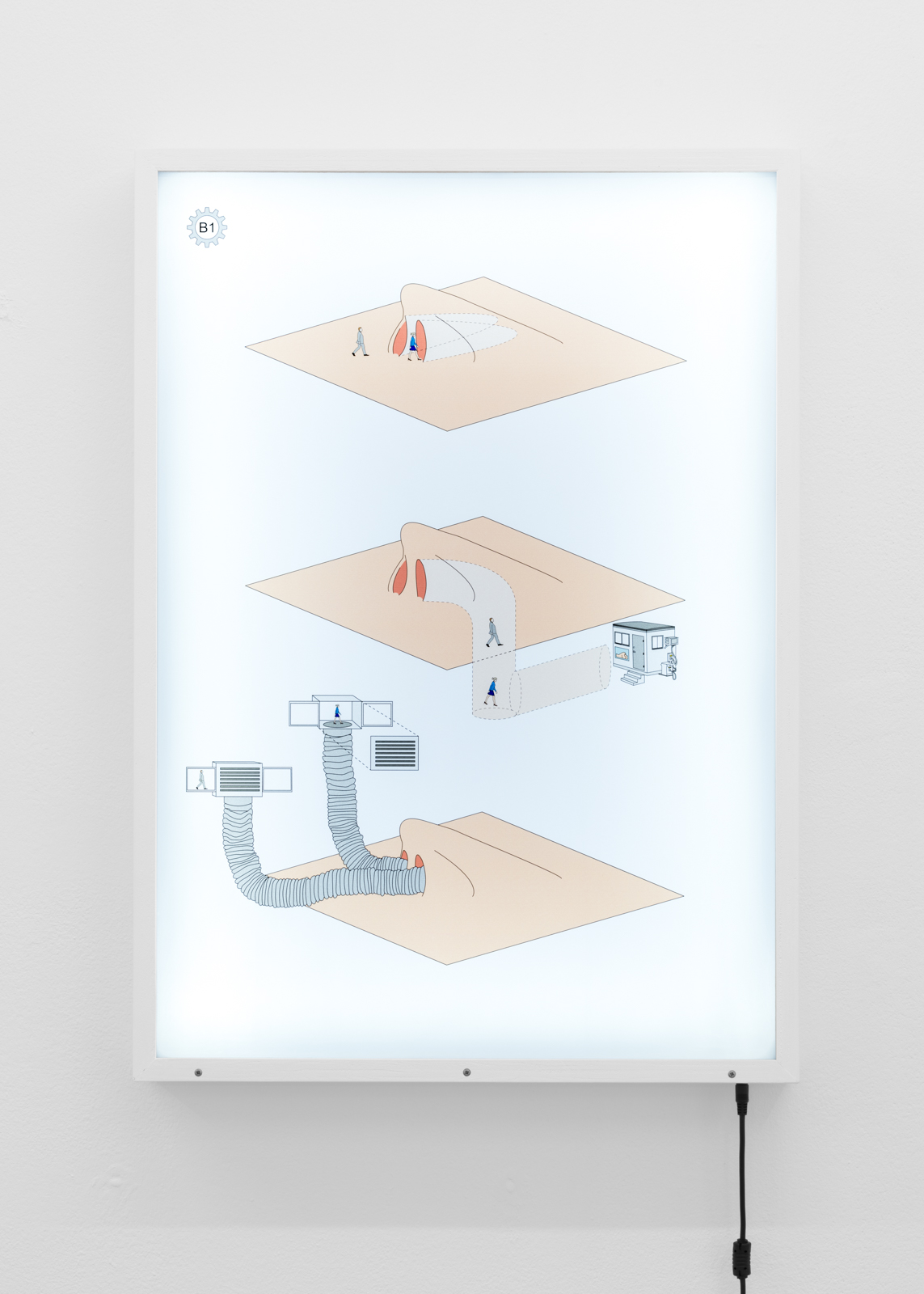 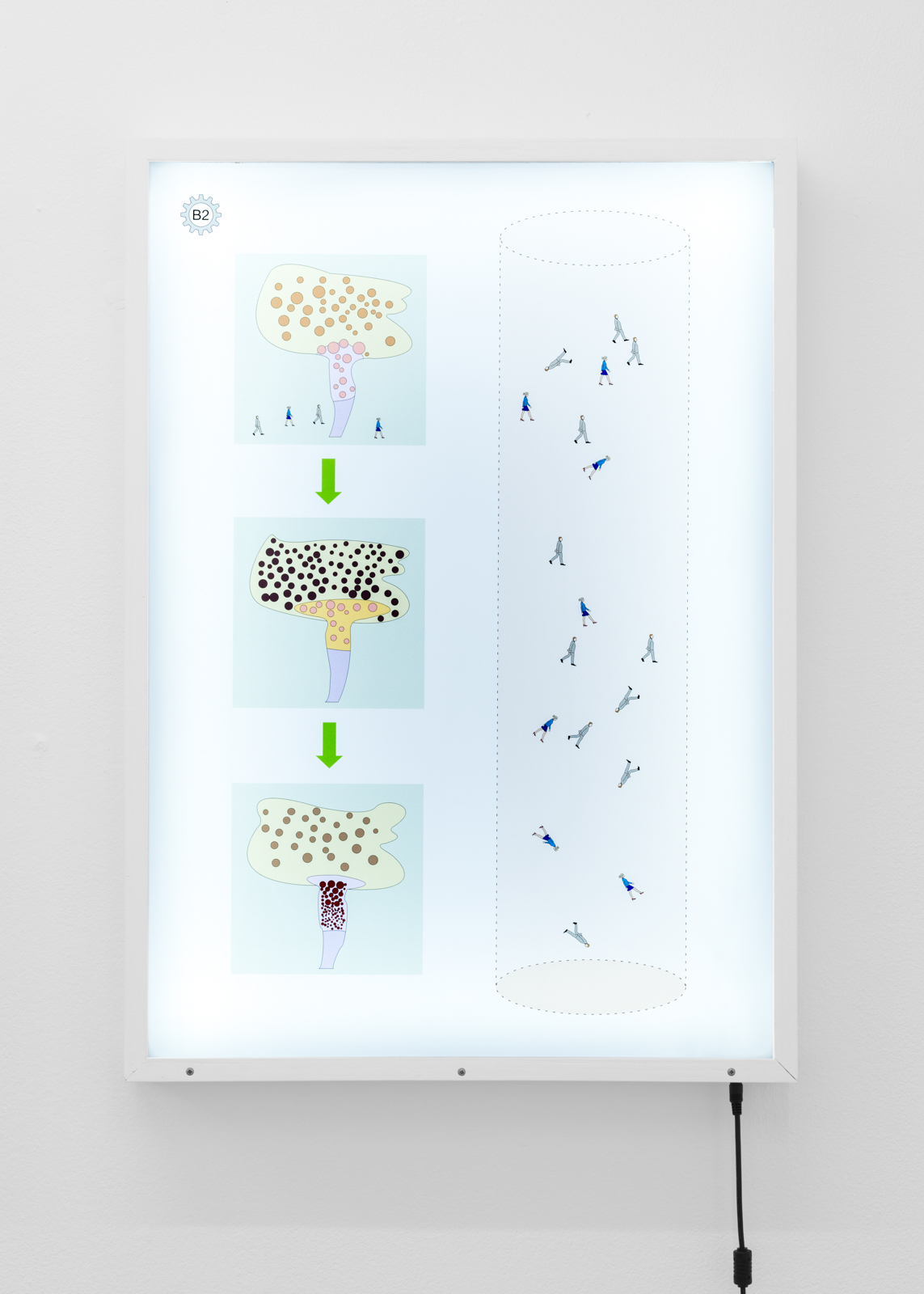 B. PLEASURE MACHINE, or Nose

The PLEASURE MACHINE, or Nose, is a machinery capable of extracting currents from the Zeitgeist, and cross-pollinating these ideas with the purpose of generating new unique variants. Through this mechanism, the machine is always at the forefront of development, and invents products yet unknown to The User.

Combining big data statistics and in-depth psycho-geographic reviews, the PLEASURE MACHINE, or Nose, can foretell specific movements in historical timeliness. In this way, it is possible to invent new concepts for user-stimulation by offering solutions to problems yet unknown to the contemporary consumer. The machine is operated from a control house beneath the nose, from where the tentacles submit to the Easy-Touch Interface.

When switched on, the PLEASURE MACHINE, or Nose, immediately shoots out two tentacles through the nostrils. The external nostril-openings function as a gateway to the turbinates, in which two separate shafts connect to the machine-core. The tentacles are rooted at the machine-core, and instead of an additional cooling system, the exhalation of the tentacles is used as a means to maintain a constant 32°C core-temperature. By maintaining this temperature, hypertrophy is avoided, and a comfortable working environment is ensured. Utilizing ultrasensitive cilia located at the outermost edges of the tentacle-apertures, the nose can sniff new currents in the Zeitgeist and incorporate them into the machine itself. The tentacles draw on the latest ventilation technology, specifically, the newly invented ventron, which extracts the particulate materiality of the air in relation to current flows, primarily through sweat. The ventron collects sweat fumes, and is capable of distinguishing between a large number of bodies, and further subdividing the biological composition of each separate body. The fume-input of the PLEASURE MACHINE, or Nose, is the substance that historical timeliness allocates. The machine will convert this historical substance into an ahistorical use-mass by processing it in its ventilation shaft, and converting it into product concepts. It is then up to The User to employ the use-mass in an appropriate manner. 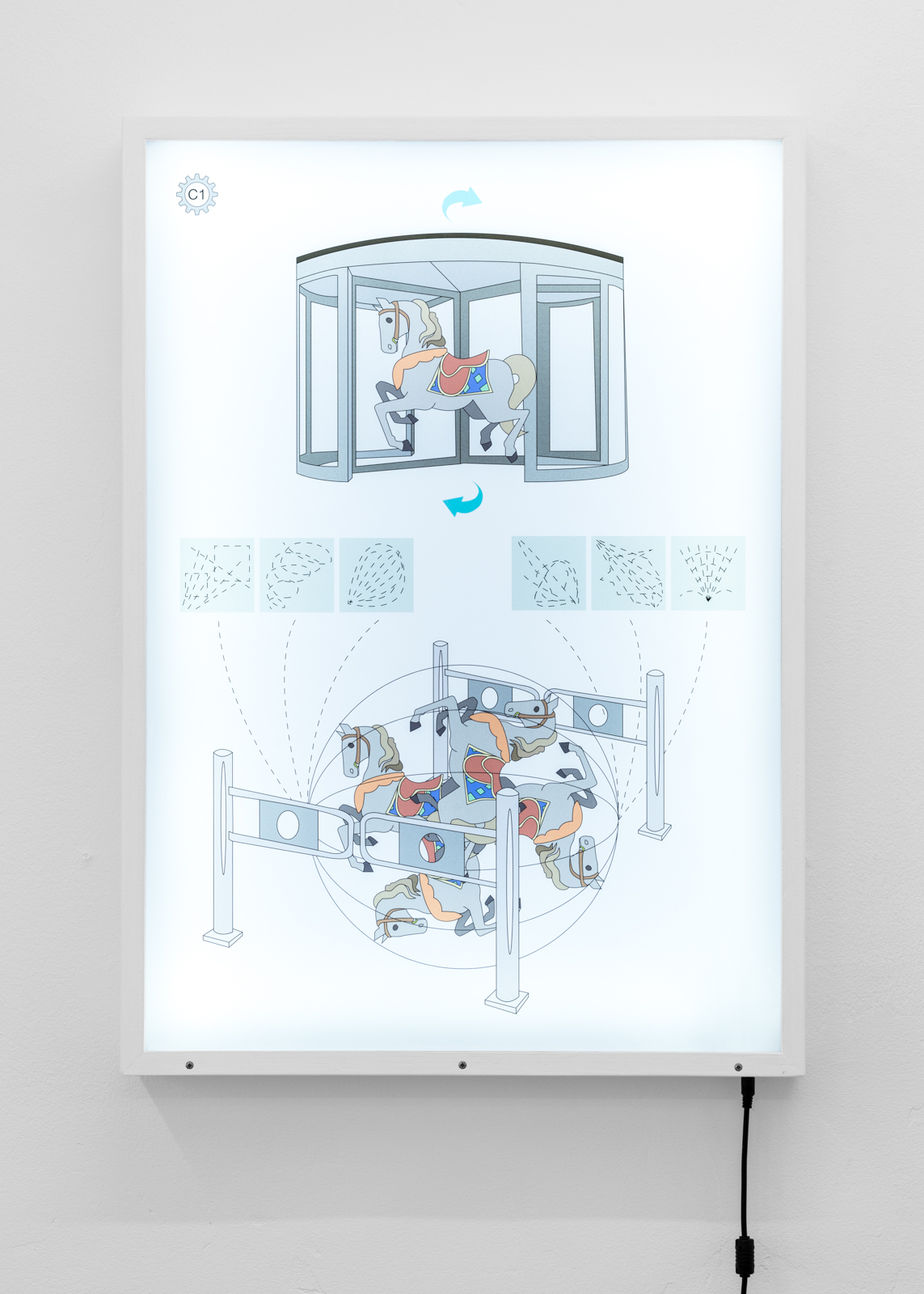 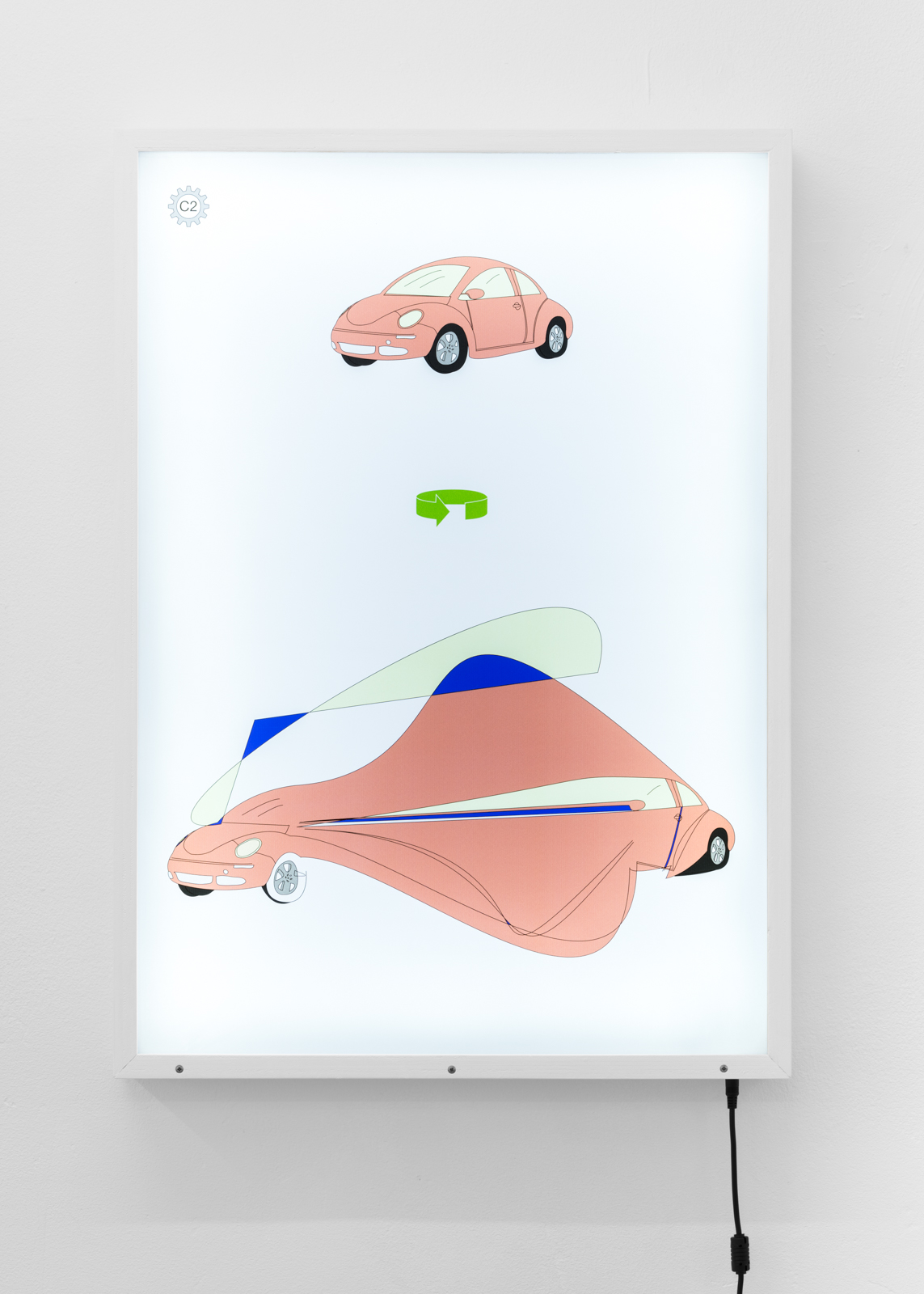 The CAROUSEL, or Pelvis, is a merry-go-round whose axis is centered around several points at the same time. It produces vanishing points which will be usable to add more perspectives to the domestic space.

To activate the machine, The User must provide an energy source, which initiates the rotation of the centrifuge. Only the rotation makes the carousel a spatial principle, which means that the carousel gains a surface upon activation. This surface is determined by the axis of rotation. As any surface can be considered a collection of points, or coordinates, these will be determined by the several points on which the rotation is centered. This makes the rotation extremely unstable, as the de-centralised center makes the coordinates, or points, constantly appear and reappear, resulting in an overall movement which filters out these coordinates as vanishing points. When the vanishing points becomes disposed of by the mechanism, they can be collected by The User. As the surface of the CAROUSEL, or Pelvis, is not subject to a reduction of coordinates, the mechanism is not transforming points into vanishing points, but rather actively producing vanishing points. Thus, the CAROUSEL, or Pelvis, adds distortion to the worldspace.

If the vanishing points are applied to consumer products such as the gender, it will bend the dimensions, as each line of the gender object will have several directional vectors simultaneously.

The CAROUSEL, or Pelvis, is constructed as a multifaceted floor property, built up as a truss structure of arbitrary triangles. Each triangle is composed of impossible measures, making the architecture highly unstable. 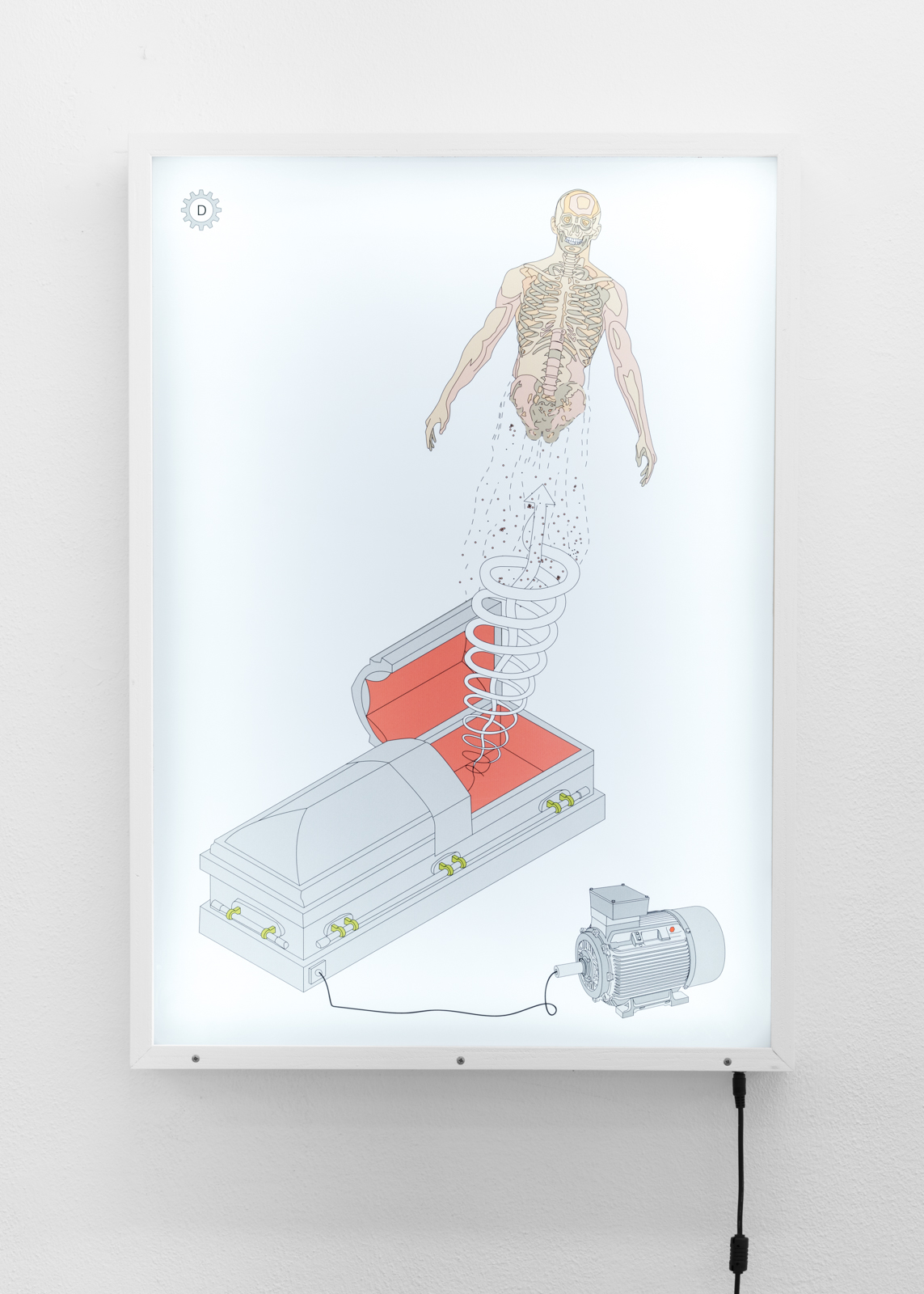 The VAMPIRE, or Spleen, is a machine that filters and recharges particles. It sucks up energy from the outside, and by internalising it, regenerates itself. It has an unlimited ability to circulate matter. By eternally circulating matter in a vacuum, it can create immortality through vampiric reassemblage of particles.

The VAMPIRE, or Spleen, consists of a steel-reinforced coffin mounted with a conical section. An airflow is established inside the VAMPIRE, or Spleen, by use of cyclonic separation, as in a vacuum cleaner, separating heavier fractions such as particles, or finite events, from lighter fractions such as gases, or infinite time. Datacom cables connect the coffin to the external folklore motor, allowing folkloric energy to charge the machine before use.

The collected particles, or finite events, are filtered through the mortician-unit and end up in the cyclone, or veins, of the VAMPIRE, or Spleen, where a spinner and an inserted airflow creates an inner vortex of the particles, or finite events. The curved veins of the cyclone spins the inlet stream, which makes the finite number of events, or particles, stream in an infinite time. As this cyclonic action is indefinite, due to the added forces of the external folklore motor, each finite particle, or event, will end up in the same position at an infinite number of times in the infinite time stream. This mechanism, known as the Eternal Return Cyclone, allows the inserted events, or particles, to constantly re-enter through the different circumferential gaps, and in this vortex they metabolize and merge once again with the main stream of infinite time. During metabolization the vacuumised particles rotate in the Eternal Return Cyclone until complete assimilation.

The VAMPIRE, or Spleen has the potential for providing immortality for body shells or eternity for events, so long as its external energy source, the folklore motor, keeps running. The User must ensure that the motor is fueled before taking the VAMPIRE, or Spleen, into use. 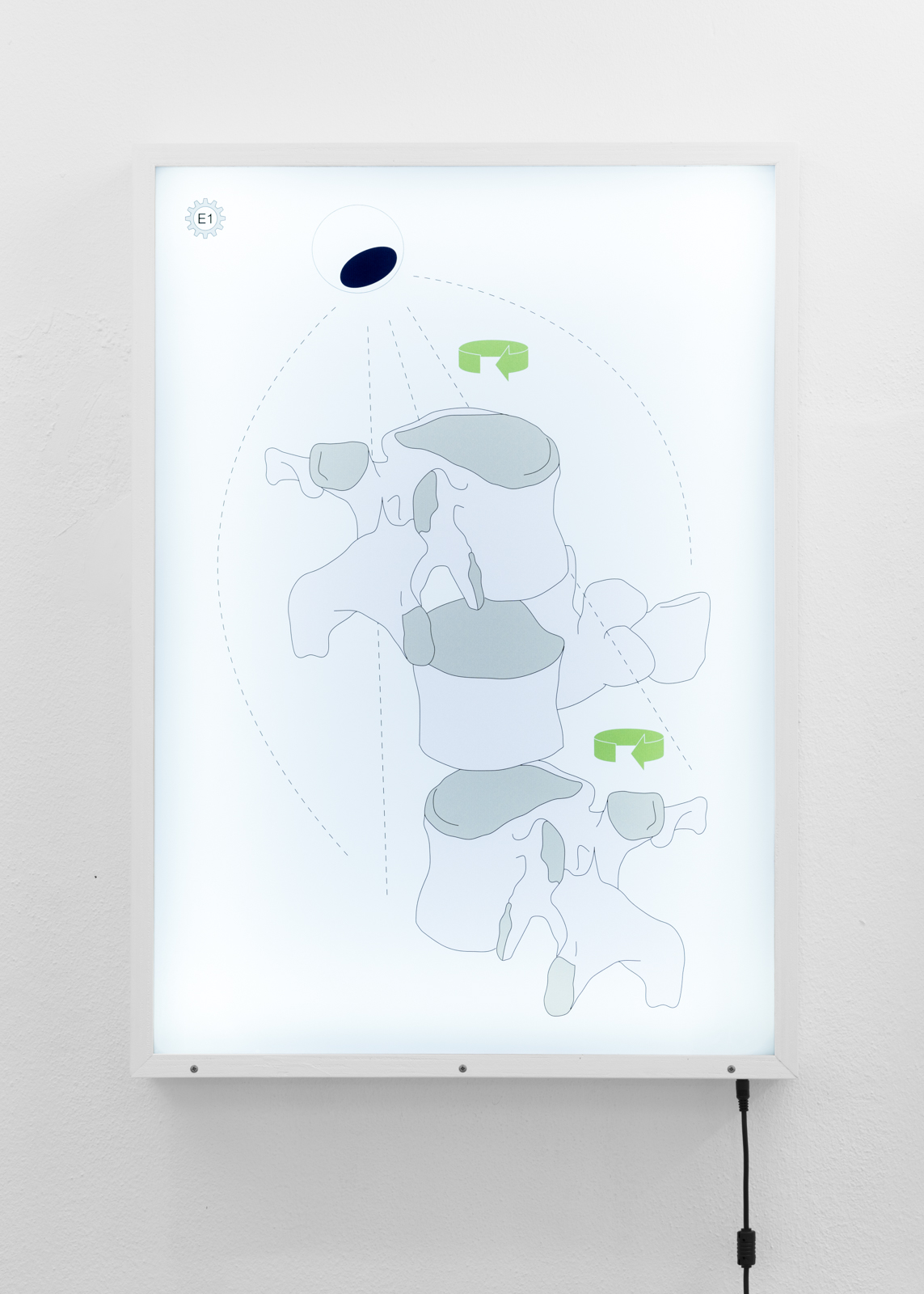 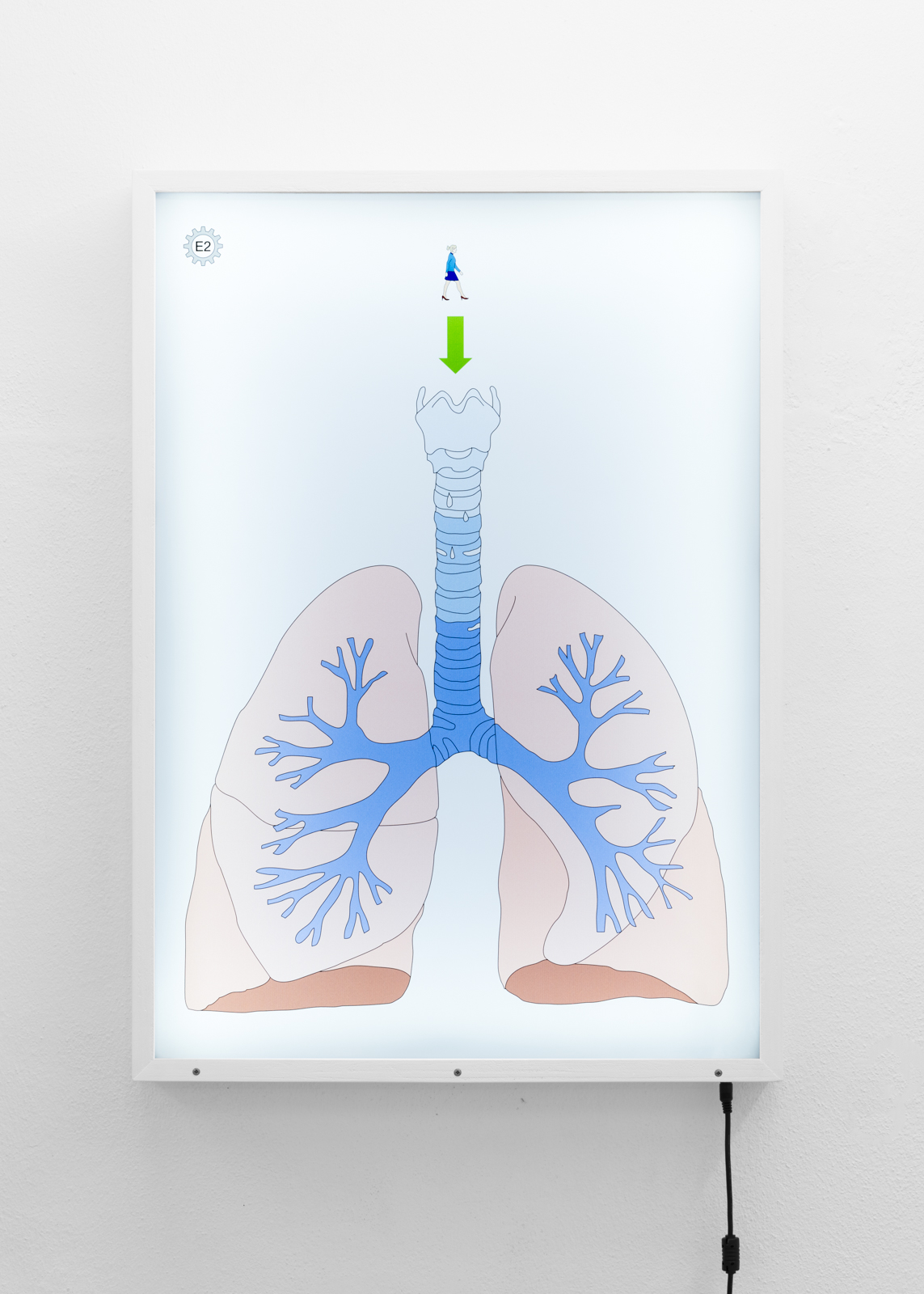 The CHASSIS, or Thorax is a device for the synchronisation between user and object. The machine is constructed as an inhalation-architecture utilising friction energy to stretch and manipulate objects.

If multiple objects are inserted simultaneously into the mechanism, they will be stretched indefinitely so that the numerous sides, or faces, of both inserted objects will be on the same plane. This procedure will align the outer boundaries of any inserted solid object. The CHASSIS, or Thorax, can be used in any home to transform the body parts of The User to form the same spatial principle as, for example, household items and furniture. In this way, the CHASSIS, or Thorax, can be used to synchronise user and home. If The User chooses to insert an arm while inserting a toothbrush in the operation room of the CHASSIS, or Thorax, the mechanism will stretch them into a singular spatiality.

The internal vehicle frame is tightened as symphonic fractals in spinal chords. The containing principle is constructed as an inhalation-architecture that exhumes rotoric coughs through an aspiration-motor. The inhalation-architecture can be imagined as rotating discs, and it is these rotating discs, which, in cough, stretches the inserted objects by mutual friction.

When using the CHASSIS, or Thorax, The User must be aware of following the correct loading order, as any haphazard application may cause the different faces to conflict.